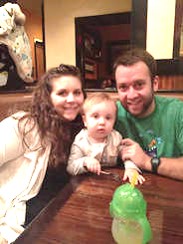 Rev. Jon Parrish and his wife Mika are based out of Concord, NC, they have one child (little Leo Wesley), and are members at Thomasville First Church of the Nazarene.  Jon has a district license in the Church of the Nazarene and is also a graduate from John Wesley University with an Associate’s Degree.  Jon was called to preach when he was fifteen years old and began preaching in various different nursing and retirement homes.  As Jon got older and a bit more experienced, God began to open doors for him to preach at different local churches in the area.  Over time, God has increased Jon’s opportunities to preach and has opened many doors for him to evangelize.  Jon has also ministered overseas in Honduras, Guatemala, Peru, and Ecuador.

Jon and Mika met in High Point, NC through a mutual friend while Jon was attending John Wesley University and Mika was attending UNCG in Greensboro.  The two were engaged soon after and were married on November 26th, 2011.  Since Jon started preaching he has always felt a strong call to be a traveling evangelist.  Shortly after Mika and Jon were married they decided to drop their plans and begin to pursue evangelism through the Church of the Nazarene. After nearly five years of marriage Jon and Mika welcomed their first child, Leo Wesley Parrish, into the world on July 28th, 2016. Mika is also an excellent drummer; she has been playing the drums since she was five years old.

After one year of pastoral ministry at Westside Church of the Nazarene, Jon and Mika felt the Lord calling them back to full time evangelism; however, this time, they will be primarily focused in other areas of evangelism such as rehab, prison, and small group ministries. Jon is also enrolled in Lee University’s online program working towards a Bachelor’s degree in Bible and Theology. They continue to pursue God’s will and are excited about what the future may hold.